On a craggy volcanic peak high above the sage-studded plains of Oregon’s high desert, an Indian woman dressed in buckskin poses for my camera. Acosia Red Elk is a beautiful American native with a personality as complex and ambiguous as my role as a photographer of Indians.

Acosia is a member of the Umatilla Tribe and a descendant from the Chief Joseph band of the Nez Perce. She also identifies with Scottish, Irish, Norwegian, Dutch, Seneca and Mi’kmaq ancestry.

While I snap away with my camera the light gets more glorious and Acosia looks like the re-incarnation of Sacagawea, the legendary Shoshone guide of the Lewis and Clark expedition. Some American tourists stare at us. They are not used to seeing Indians that look like movie stars, a popular misconception is that all Indians are drunk and living in squalor.

Acosia, my Yoga teacher, jingle dancer, subsistence hunter and social media celebrity model is hard to pin down. Like all humans, Indians come in many guises; they are not one homogeneous magical red race that communicates with the spirit of Nature. 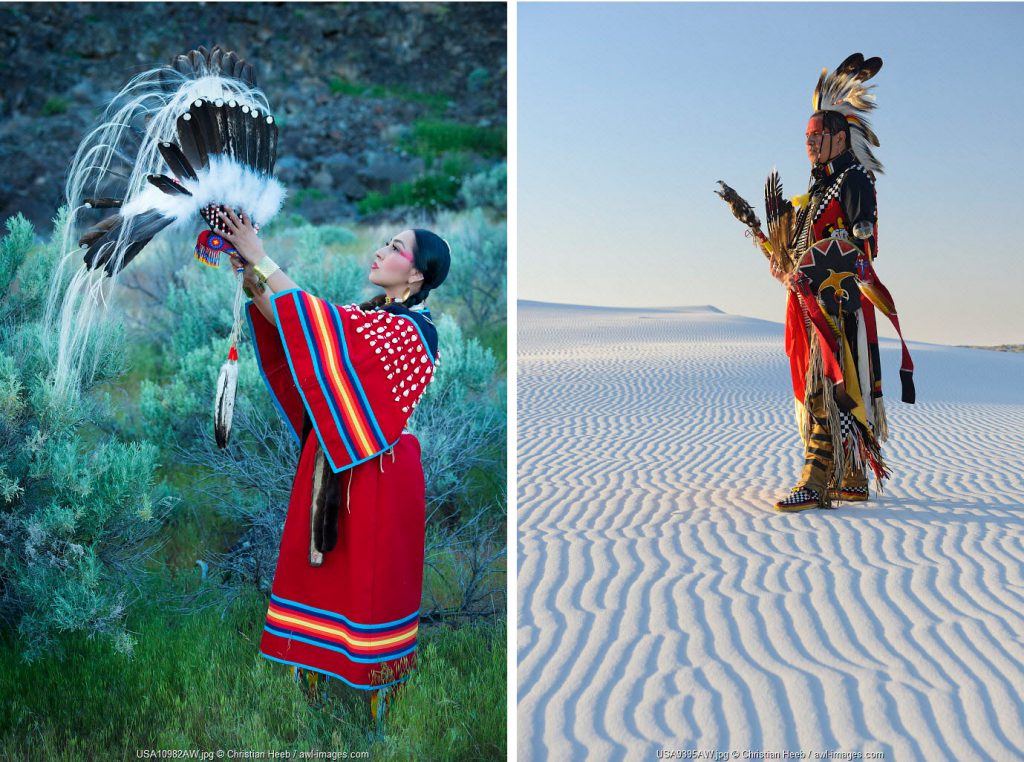 In 1986 I started my career as a photographer by traveling to the USA and Canada for 18 months with the intention of photographing native Indians and American landscapes. Driven by my romanticized European view of Indians and my desire to blend my love of photography with my love of the mystical Indian, my girlfriend and I became professional travel photographers by accident and eventually moved to Oregon in 1996.

Many people have photographed American Indians: early photographers from Edward Curtis to Ronald Reed and later, John Running in Arizona.   Nowadays, young Native Americans post their photographs on Instagram whilst American professional photographers go to Pow Wows and gatherings. Indian Country is a vast world with many cultural differences, restrictions and prejudices. When Edward Curtis took his photos in early 1900 he could still photograph in the pueblos of the American southwest – places that are now off limit for photographers.

For us, starting to work with Indians meant going to Pow Wows in Montana and getting to know people. After publishing regular calendars and books on Indian Country I eventually moved on to shooting assignments worldwide and my Indian obsession subsided. I understood that I could not spend my life photographing and documenting Indian culture. Too much of their way of life had already been lost.  I eventually understood that what native Americans had gone through was still happening to other native populations all over the world. Animistic Religions were going extinct.

American Indians have inspired European romantic fiction in a way un-equalled by any other indigenous group, starting with ‎François-René de Chateaubriand’s Atala love story of 1801, followed by James Fenimore Coopers’ Last of the Mohicans, the German Karl May’s Winnetou and many more.   After the writers came Hollywood: the American Dream Factory spread the Indian story across the vast realms of Pax Americana. There simply is no Australian Sitting Bull or Maori Geronimo.

Instead of documenting today’s Indian Country, I choose to photograph classic romantic portraits. It serves me well commercially and satisfies my own Weltbild (“world picture”) of Indians.

As possibly my last project in Indian country I have started to photograph my Indian friends in contemporary settings. Native people live throughout America and all over the World, not just on impoverished Reservations. They are doctors and lawyers, run ad agencies and produce music. They are part of the American mainstream and of the radical fringes. Many are Christians.  Some hold on to their animistic beliefs.  Some do Peyote (a psycho-active extract from a cactus), whilst others are drunks or criminals.  There never were so-called “Indians”.   Most tribal groups called themselves simply The People. Like most humans they identified with their own tribe and like the rest of us they did not always agree with their own people. They were and are just human after all.

Our specialist travel image library is the carefully curated synthesis of images supplied by many of the world’s leading photographers and the edited highlights from the very best international image collections.

Private photography tutoring There is no better … END_OF_DOCUMENT_TOKEN_TO_BE_REPLACED

A Days Experience Enjoy a day exploring the … END_OF_DOCUMENT_TOKEN_TO_BE_REPLACED

A terrific photo workshop well planned and executed by David Cobb & Christian Heeb. Included multiple sites in Nevada and in California. Early AM and night photography as well as portrait photography. Knowledgeable, articulate instructors who are flexible. Small group […]

This Site Is Protected By
Shield Security →